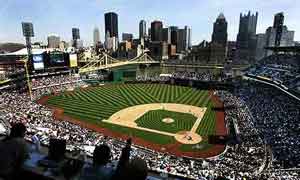 When was the last time you went to a ball game and rooted for the other team? We Americans have good ole hometown pride, and for good reason. Our great nation holds more heterogeneity that any other country on Earth. Love the beach? Choose from the east or the west coast, or maybe Hawaii. Want to see nature at its finest? The phenomenon in Yellowstone, the Grand Canyon, and Anchorage are unforgettable. More of a camper? Try Yosemite or Jackson Hole. Want a little privacy? How about the Painted Desert? We have it all, and in between those natural wonders lay some of the best cities and small towns in the world. It is we the people and our rich heritage who make it that way.

Travelers worldwide flock to the US to partake in our wonderment. Here at home each year, the average employed American receives thirteen paid vacation days, and eighty-six percent of Americans take an annual vacation. With 115 million households in the US, that’s…well, a lot! With all the beauty in America, why travel anywhere else?

We have so many awesome attractions and wonderful towns and cities to choose from, it’s hard to pick where to start. Woven into the fabric of America are a few jewels, each with a unique tale to tell: America’s Roadside Attractions. As we explore our country and visit communities great and small, we’ll shed a spotlight on few of these gems along the way. In honor of the great question of which came first, let’s start with the World’s Largest Egg.

As with so many of our great American Roadside Attractions, the World’s Largest Egg was 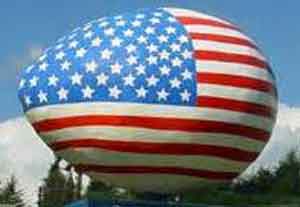 borne of industry. Winlock, Washington was our nation’s second largest egg producing town until the 1950s. In 1923, the giant egg was fashioned out of canvas to celebrate the newly built Pacific Highway. It has been through several upgrades, first to plastic in 1944, then fiberglass in the 60s. Vern L. Zander, a local egg entrepreneur, financed the most recent upgrade before his death in 1993. The egg stood defiant against terrorism after the 9/11 attacks in a red, white, and blue uniform. In 2004, it proudly read “God Bless America”. Reports of yellow ribbons, perhaps a symbol of the grand egg’s yolk heart, waved free, honoring the sacrifice of 9/11. 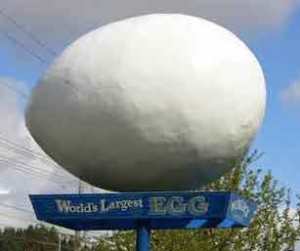 The twelve-foot-long egg, weighing in at 1,200 pounds, nests on a ten-foot steel pole on First Street in Winlock, off Highway 505. It has returned to its original white color, though rumor has it that local high school students adorned it recently in Easter splendor for the holiday. The egg participates in the festival on Egg Day in late June annually.

Winlock was named after the army general Winlock M. Miller and was settled with immigrants from Finland, Sweden, and Germany. The city is about 1.29 square miles and is home to about 1,400 people. Kenny Stone, who won five National Basketball League championships, attended high school in Winlock.

It’s hard to imagine anything more egg-citing than the World’s Largest Egg. What will be our next stop as we celebrate our history in our tour across America?