Welcome to the Wonderful World of Wiener Dogs

The week that my husband and I moved from Chicago to Pittsburgh, contractors were still completing the final work on our home: painting the entire inside white, and installing new light beige wall to wall carpeting throughout. The next week we bought a puppy. I had no idea at that time what a difference that warm little bundle of fur would make in my life with family, friends, and the world. 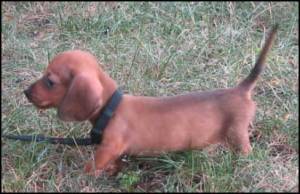 We bought a miniature short haired red dachshund and named him Theodore, after “The Chipmunks”, with thoughts that perhaps a brother or two named Alvin and Simon might show up some day. I had never owned a dog, but had cats in the past and I thought “How hard could it be?”

The breeder suggested that we immediately begin crate training, but since Theodore was only seven weeks old, we should get up every two hours at night to allow him to go to the bathroom and feed him something light to avoid blood sugar issues. Armed with this knowledge, the first night we left Theodore in his crate in the kitchen and off to bed we went. We spent the next several hours staring longingly at the clock for the next authorized check in while Theodore tugged at our heartstrings with some of the most pitiful sounds I have ever heard. Determined to do the right thing, we repeated this on night two. Amazingly Theodore didn’t make a peep all night long. I was right, how hard could it be? Night three answered that question. By the end of the week, Theodore was nuzzled comfortably between us when we went to bed. I began to realize that somebody was in charge, and it wasn’t me or Bill.

My entire family was excited about Theodore. My dad and Theodore instantly bonded. My sister brought her two kids over for the first time and we began making plans for future dinners and other events at our house, “Theodore’s first this and that” and “Can we bring toys?” There have been a lot of family challenges over the past couple of years, and Theodore has been there to help bring kindness and love into every situation, the good and the bad.

More than just my family began to notice this cute little puppy who could sit in the palm of my hand. Small groups of children started gathering in our front yard. We even had knocks at the door, followed by “Can Theodore come out and play?” or “Can we see Theodore?” This activity was followed by small groups of parents stopping by to apologize for their children’s bold interest in our dog so close to our just moving in. Of course, we were delighted to have such a wonderful opportunity to meet our neighbors of all ages. Having been away from Pittsburgh for decades, I did not know a lot of people in the area, and Bill had never lived here.

Many of our neighbors have dogs of their own, and we began to hear about food tips, and pet stores with great stuff. The most impactful thing we heard about was “The Dog Whisperer”.  We weren’t sure what kind of dogs they got on that show, but they sure acted differently than Theodore. Cesar Milan went on and on about the importance of walking your dog. “Birds fly, fish swim, and dogs walk” he would say, but that couldn’t possibly apply to a dog as small as Theodore. We needed very specific help in teaching Theodore where to go to the bathroom and what not to chew. Cesar would say, “If you are a pack leader, the rest of the pack will naturally follow and respect your boundaries”. Of course we were the pack leaders, just look at the size of the little guy.

We were sure that there was something wrong with the dog, and that training him would correct the problems. The trainer’s first question was, “How often do you walk your dog?” I answered that we didn’t walk him very much because he pulled at the leash and it seemed to choke him. The truth of the matter is that this little pound and a half puppy walked us. The trainer took a hold of Theodore’s leash and the two of them walked in perfect harmony across the PetCo floor and back. This was an eye opener. The trainer said “You and Theodore will be fine. We will train you as a team so that you can learn to communicate with each other.” Ahhhh………a light bulb went off.

With encouragement from our family and neighbors, we continued through the Canine Good 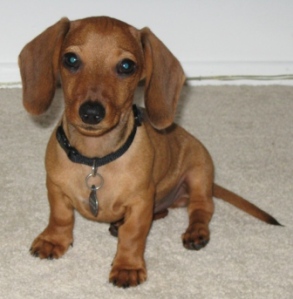 Citizen program and passed the Therapy Dog International test. As we walk through the neighborhood today, two and three year old kids say “Off, you’re in training” as Theodore approaches. People shout “Good boy Theodore!” from passing cars. We also go to small dog socials, which have helped us both immensely with our communication skills, both human and canine. We went to a pet blessing at the church and have begun to build relationships there. As my mother’s health deteriorates and we explore next steps, Theodore’s Therapy Dog designation has helped smooth difficult conversations at various facilities for my dad. It has also helped me forge deeper relationships throughout the community.

Theodore has taught me to understand the viewpoints of other people, as I have sought to understand the viewpoint of a dog. He has taught me patience, willingness to look honestly at myself and change, and that belief in a bigger picture can have a profound impact on happiness. Dogs are perfect right out of the box. It’s us, the humans, who need training.